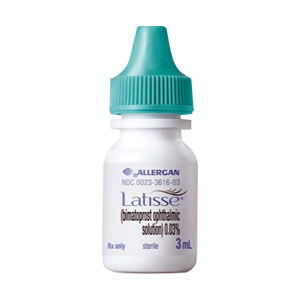 Generic Latisse 3ml To Strengthen The Beauty of An Eyes

The mechanism of Generic Latisse mainly involves making eyelashes grow longer and denser. Eyelashes also follow the same hair growth cycle pattern as our scalp hair. Generic Latisse stimulates hair growth when they are in the active growth phase, which simultaneously increases hair follicles. If you use this ophthalmic solution consistently, you will probably get visible results in two months. Later, after three to four months, your doctor may ask to use it on an alternate day. However, if you stop using this drug, your lashes may revert to the initial state.

Do not self-medicate without doctor’s advice in case of-

Nearly every other drug has contraindication, including Generic Latisse. The usage is limited in some individuals, such as:

It approximately takes three to four weeks if you are using this gel for enhancing eyelashes. However, the treatment is for sixteen weeks.

Do you need a prescription to buy Generic Latisse?

Yes, in the USA, Generic Latisse is not an OTC medicine. You need to provide a valid prescription to buy this eyelash enhancing drug.

Generic Latisse has been approved by the FDA to grow thicker and denser eyelashes. However, with age eyebrow growth can get scanty. Though, studies regarding Generic Latisse use for eyebrow have not been conducted yet.

How to store Generic Latisse?

Store Generic Latisse drug in a cool and dry place, place the bottle away from direct moisture. Also, keep it away from the direct reach of children. Also, read the leaflet carefully to know about the safe disposal of this drug.

There are no reviews yet.

Be the first to review “Generic Latisse” Cancel reply